It was lunch! (I'm in there somewhere. Unfortunately, not one of the handsome ones.) 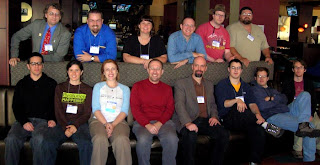 There's only one person I didn't get to meet in this picture. That guy. Right there. I'm pointing at him. I almost didn't meet Thomas Holtz, but was lucky at the literal last minute (I was on my way out the door to the airport).

Well, it seems that talking about what we've seen at SVP is probably a bad idea--or at least, that's the position I'm taking on everything I saw there, in posters and the technical presentations. If I have questions, I'll be making them wait. I can live with that.

But there are other things to talk about, surely? Yes. Behold:

I do wonder if it might have been better if non-English speakers were able to deliver talks in their native languages, maybe with some sort of live translator present like they used to have in old movies at the UN. Some of the talks were difficult to understand, and I can't imagine it was any easier for Chinese or Japanese speakers to deliver a presentation in a second or third language.

Does that make sense?

Is there a mathematics primer for the stuff that gets used in paleo? Some of us would appreciate it if we knew some of what the heck was going on. Think "See Jane Run. Run Jane Run. See Jane Solve a Bunch of Calculus Problems That Suspiciously Resembles Greek without Grammar..." level. I'm serious, I've lost virtually all the math literacy I used to have, and that wasn't much. (Something about not having had to use it much.)

I picked up a copy of the 2nd edition of The Dinosauria for what I thought was cheap ($45, hardcover) until Nick Gardner pointed out an irritating reality (or maybe not--I can't find it anywhere online for $15 or so bucks). But now that I have it, I'm still compelled to keep the first edition. Is there a good reason to not do so?

I went to the dealer room a lot. There were a number of books I really wanted, but simply couldn't afford (like the great cats painting book--whoever wound up with that $130, gorgeous tome has my undying envy). But I also got a book filled with Zdenek Burian paintings of marine reptiles, a children's book on the sculptures of Waterhouse Hawkins, two Richard Ellis books on sharks (The Great White-hardcover, and just Sharks, filled with lots of his paintings in color).

I also purchased a nearly or exactly 1/18th-scale resin statue of Triceratops by Michael Trcic, and his Parasaurolophus in 1/35th. Those last will be mailed up to me, along with my leftover laundry and swag that wouldn't fit into my carryons (I checked no luggage this trip--it saved an indecent amount of time to not do so).

With one exception, I didn't go to any of the after-hours events. Just tired, I guess. I wish I could have stayed all day Saturday, though. Wednesday was awesome at the museum.

I learned it takes Michael Skrepnick about 60 days to complete a painting (dependent upon complexity). That still amazes me, especially after what I went through to get the Archosauria show finished. There simply is no parity in the level of detail I accomplished and what he can accomplish.

This suggests I need more practice. The man also claims he can get the same effects out of acrylics that he can get out of oils--looking at his work, I believe him.

I did feel some small vindication talking to William Stout; he uses oils. Acrylics and I--well, I'm just not competent with acrylics.

Speaking of awesome, I wonder if it makes sense to suggest an artist-meet-type event at SVP. Beyond just merely meeting some of the amazing artists running around at SVP, I'd love to hear what more experienced/less-tentative artists (including those much younger than myself) might have to say to the rest of us. Maybe just a lunch?

(David Krentz does have that Gnomon Workshops video. Hm. Soon as I have money, I'll get me that.)

SVP was good to me. Before going, I was burning out, a little, in part due to the show and all the haste necessary to scrape it together, but also in part due to the fact that I haven't been doing so well as the days get darker. I've always been sort of a solitary individual, largely of my own choosing, but sometimes not. The resultant isolation can be a downer as well as a major stressor. Last year (about September) I went through a particularly bad bout of depression which lasted for about six months. In that case, a spectacularly hateful job (a badly managed valley newspaper) combined with ... ah, well, let's just say other emotional issues made coping difficult, to say the least.

I think SVP gave me enough fuel to make it through the winter.

[UPDATE!] Oooh, and Jim Kondrat of Paleo-Tech Concepts allowed me to play with a $20,000 piece of laser-scanning hardware.

I'd like one of them for my living room (pretty badly, it turns out). If I can get the resultant geometry into Maya (4.0, Unlimited, Irix), it would be pretty darn sweet.

I don't think the Parasaur is Trcic. Also, the Triceratops is galloping. What's up with that?

"Also, the Triceratops is galloping. What's up with that?"

(And, thinking about it, it was closer to 1/35th scale. Not sure about the Parasaurolophus. I do think it was Trcic, however.)

Brianne, You may call me Mistressyness said...

Hi. I've just turned a very saturated green. I think I might have to tag along next time!
I'm so glad you had a blast!
Oh, and I know a certain unemployed artist who could make use of an out of date Dinosauria.....

"Saturated Green" describes how I felt on the plane over and back.

But yeah, if you want the book, I can part with it.

(I can also get you back your other book...)

Was great to meet you! There are handsome palaeontologists??? Come on, in the world of the pallid and nerdy, the guys with the cool hats are kings!

As for mathematical primers, I don't think a "Mathematics for Palaeontologists" book exists (but hey, does anyone want to help me write one?). To be comfortable at SVP I think you'd need to know basic statistics, like what r-squared values mean, Templeton tests, chi-squared tests, p-values and all that. You could do with a brief guide to cladistics, a bit of physics (nothing beyond high school and only the sort of newtonian force-balance stuff), perhaps a reminder of trigonometry, and an introduction to morphometric techniques and what finite element analyses and CT scans do.

With that, you'd probably be a lot happier, but you shouldn't be too worried about not grasping some of the mathematical stuff - a lot of it still goes over my head and I'm willing to bet that there are older students, postdocs and professors who don't understand the maths either.

All math that is complex enough to involve a sigma is a very dry and unsatisfying form of satanism.

There is no single person in that photo who is attractive. One of them may be androgynous, but not in a good way.