Teaser: Scales on Synapsids: Why?

Coming up, an inconclusively researched essay on why I think restored synapsids should not have scales. I'm not doing this to be cranky, but there are some very specific reasons as to why it bothers me whenever I see such animals reconstructed with scaly integument. Biggest offenders: CG critters. I love me some CG, but Maya guys, there is a better way.

Actually, ought I do teasers? They actually seem somewhat redundant.

Posted by Dicing with Dragons at 2:42 PM No comments:

So here's some work, referenced from here and here on St. Cyril's Contraption. 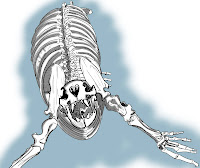 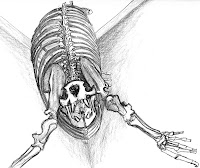 Posted by Dicing with Dragons at 12:45 AM No comments:

About this sudden return to blogging...

It's hard. Mustering even competent-levels of productivity on the blogging front has been challenging, especially since I have other work I ought to be doing (proper CG rocket exhaust, Xenopermian drawings/paintings, other stuff I won't allow myself to mention...).

So I have to admire people like Glendon Mellow, Trish, and, really, anyone in the Art Evolved crew (linky below right) who not only writes, but manages to post sketches/completed work, too. Apart from being awesome, how do they do it?

In my previous post, I failed to mention (unacceptable!) I have a pretty kickass crew of friends (acceptable!); so things are looking up. Nevertheless, I've allowed my ability to become depressed to push down my output in general, and if there's anything that I hate more about this aspect of my psychology, I'd like to be introduced to it (not actually an offer).

But thanks to some great people and technology (like an awesome girlfriend, full-spectrum illumination, and possibly some old toy trains dug out for the Xmas tree), I've managed to shake the funk enough to get back to drawing. And now, possibly, blogging, too.

So here's what's on the agenda: I need to get organized, but I think my range needs to be broadened. I do a lot of dinosaurs and extinct animals. I need to do other things as well.

I also need to do less work digitally. I'm not abandoning the Cintiq, nor Photoshop, but I really do love watercolor, and as intense as it is actually painting with watercolor, there's a release from it that I don't get from open-ended media which have no definite sense of completion; a watercolor is done once the page is full. With digital, or even oils to an extent, I don't get the same sense of finality, of being finished with something.

Recently, I've been fantasizing about the ideal studio. As of this moment, it's a dark room filled with banks of computer equipment in a corner (quite loud when powered up, but a necessary component of my work), and surrounded by books (which isn't so bad), or it's a noisy cafe.

But if I had unlimited access to resources, I'd like a small, octagonal building, maybe 25 feet in diameter, surrounded by windows, flooded with natural light. Room for cabinets for laying artwork out flat, a modest art library, an easel or two, light table, scanner and a laptop. And room for watercolors.

Maybe someday.
Posted by Dicing with Dragons at 6:59 PM 5 comments:

A year ago today I was discharged from work. It's been a rough year, filled with a lot of stress from not knowing what's going to happen. But we have survived. And the struggle for work and a new job goes on.
Posted by Dicing with Dragons at 11:39 PM 1 comment: 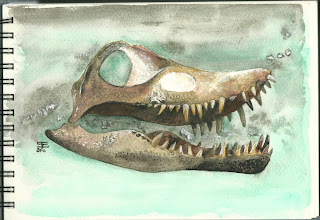 Is now available as a photo print from the artist for $60 (6x9) plus shipping.
Posted by Dicing with Dragons at 9:36 PM 2 comments:

Impressions of a Visit to the Origins Museum 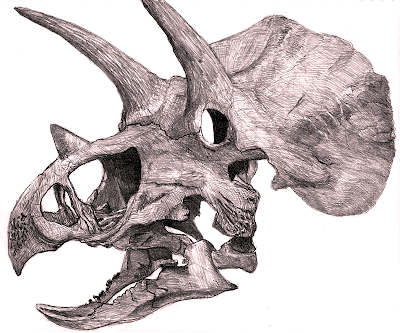 From the first, the exhibit is striking: the biggest things immediately noticeable are the fossil skeletons, and these made me want to pay admission as fast as possible. The exhibits of the texts are more subtle, but also easily worth the price of admission on their own. In this, I'm biased: I do like looking at books. The collection is nothing short of impressive: the books are phenomenal, both in their condition and significance, but I'm only going to talk about the fossils and other relevant material (though I might take this up again later and go into additional detail on the other exhibits).

The large skeletons were lumped together into a central pen near the right as we walked in. There's no mammal material, and what material there is was limited to a partial Edmontosaurus (only the pelvis and legs were on display; apparently, there was a mishap with the mount earlier in the month), a small (adult? Seems like an adult would be bigger) Einiosaurus, billed as a "mother" (though there's probably no way of knowing this), a juvenile Einiosaurus, a Mosasaur, an elasmosaurid, and a medium-sized Triceratops skull.

In a case off to the side was the best specimen of Rhamphorhynchus I've ever seen, and a large mounted display of Carcharocles megalodon teeth. An unidentified gavial (?) was set in another case near that, and the only invertebrate fossils I saw was a single horseshoe crab and two cases of trilobites.

All of these animals were presented without any context whatsoever. Little effort was made to indentify them, and even less effort was expended in telling us where they came from (in the sense of where they were originally collected). 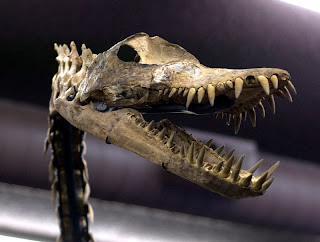 The short-tailed elasmosaur might be Muraenosaurus (though if it is, it isn't an elasmosaur, but a cryptocleidid). Zach and I both counted 43 cervical vertebrae, and some sources suggest it should have 44 ("usually"), though the specimen on display might have had material missing on that point; the caudals are certainly fabricated, and the museum does make it clear that at least up to 55% of any given specimen is made of genuine material.

Sometimes minor details were wrong on the placards. The elasmosaur was indicated to have over 70 cervical vertebrae. No big deal, really.

The most painfully wrong info sheet was for the Rhamphorhynchus: "A genus of fish- and insect-eating pterosaurs [sic] of the Jurassic Period, from about 200 to 145 million years ago. The presence of teeth positions this fossil as a "missing link" between flying dinosaurs and modern birds." 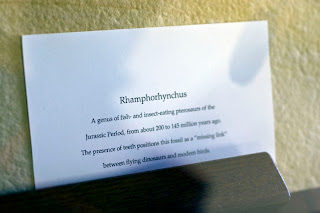 This is mostly relevant and true of Archaeopteryx, perhaps, but not of any Pterosaur!

The biggest "So what?" response invovled one of the notes on the Charles Darwin placard: "While Natural Selection is considered one of the greatest scientific discoveries of the 19th century, it has not been universally accepted as it is not consistent with Creationism."

Of course they don't. People unqualified to judge science seldom seem to feel obligated to accept anything that falls outside their experience. What the display should have posed was why the unqualified should fuel any rejection or controversy of Darwin at all.

To the Museum's credit, it should be noted that they do essentially say this, in much smaller print: "[The Descent of Man and The Origin of Species] have had fervent supporters and fervent detractors--from Victorian newspaper columnists to modern American schoolboards--though, to this day, most of the loudest debaters are ignorant of the content of these books and the subsequent qualified advancements in the field." Since scientists actually know their stuff, it's hard to argue with that. 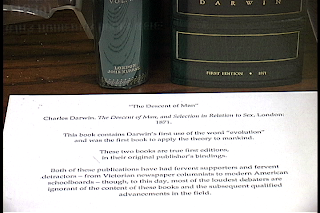 If there's anything a secular museum like the Alaskan Museum of Natural History (or any museum) can learn from the Origins museum, it's the fact that the Origins museum does not present itself as a children's playground. No children's tar pits take up unnecessary room, there are no toys available for sale, and, apart from a single-sheet scavenger hunt that I was able to use to induce my nephew into looking at every part of the museum (including the text-only panels above displays), there was nothing particularly appealing directly to kid-interest. This strongly suggests that the playground aspects of at least some museums are probably unnecessary.

That's not to say there aren't flaws with the presentation.

The biggest issue is the lack of context represented in the displays, especially on the exinct animals side. Another flaw is the lack of any displays about biology more recent or modern than Watson, Crick, et al.'s work, even when it would show how science changes how we understand the natural world. For instance, the Systema Naturae works on display should have been accompanied by a discussion of modern cladistics, and how the two systems have shaped how we understand and organize taxa, and how cladistics reflects evolutionary thinking, and Carl von Linné, in preceeding Darwin, really couldn't. One of the biggest reasons science adopted Linnaeus's work is not even mentioned: how scientists can discuss the living world in a consistent manner by agreeing on names that don't vary in usage as common names do (in other words, the binomial nomenclature).

It was nice to see first editions of The Origins of Species on display, but though Darwin is credited (correctly) with a lot of credit in coming up with the theory of Natural Selection to explain evolution, he wasn't alone. Context is crucial in understanding any historical event, including scientific ones, and some time and space needed to be dedicated to showing this.

Displays showing how the animals are related to one another were almost completely absent; this would also have been useful. Behind the skeletons were printed murals of the continents at specific points in time (from 500 million years ago through recent, though oddly labeled as "BC" instead of MYA), but the continents are unlabeled, and it's unclear why these stages of the continents are depicted, unless it's merely to show the changes on the Earth through deep time. 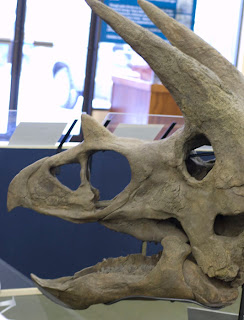 It's been suggested that the Museum offers tools for understanding both science and theology, but without some serious modernizing of the science as presented, I don't see this at all. Science doesn't stand still, and a history museum should not present it as though it did.

A notable thing is that, though principally (and deliberately) religious, this exhibit didn't shy away from using the term evolution. It didn't suggest "intelligent design" as an alternative, nor did it try to overtly suggest that science was directly competing with any particular religious view, and that leads me to believe that, biased though the museum may be, it is genuinely trying to be honest, a refreshing rarity in a time when garish theme parks masquerading as museums (like the Creation Museum in Kentucky) dominate discussion. Such places make pretenses towards being scientific, but they fail to represent science in any sense but the dishonest.

That's significant, and worth the price of admission.

And it was unequivocally a good place to get some drawing done. I'd go back. 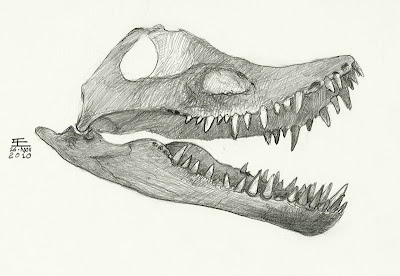