I'm back. Details to follow after the notes are tidied and in place (and my jetlag is slightly less). The short of it is this: England was amazing, and SVP was awesome.
Posted by Dicing with Dragons at 12:01 PM 1 comment:

I cross the Atlantic for the first time in about 10 hours.


See you all on the flipside.
Posted by Dicing with Dragons at 3:30 PM No comments:

Labels: England, hey look I'm getting out of the house, SVP 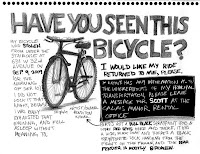 Like the picture says: my bicycle was stolen either Wednesday evening or Thursday. I'll be putting up these flyers in the vain hope that someone may have seen it. (Since I'm going out of town next week, I'll be leaving behind the cell--there's simply no point in keeping it with me when I won't even be able to use it in England.)
Posted by Dicing with Dragons at 3:35 PM No comments:

Labels: people who need to be struck with an assortment of hardwoods, stolen cycle

Why I Am Going to England

Because it is, in a word, essential to my development as an artist to see things and to travel to places filled with art and history in their own right.

Other artists can stay at home all day and do great work. But I'm not they. I need to improve. SVP and this trip to England is just another part of this (admittedly long-going) process. If you're artist or not and/or a paleogeek, I hope to see you in England.
Posted by Dicing with Dragons at 10:08 AM 2 comments:

Labels: artistic development, England, hey look I'm getting out of the house, SVP

Over at SVPoW, there's a revolution a-brewin'. It's about pricing appropriately for your target market, and asking absurd sums for what is at most a 288-page volume, no matter how compelling the material, is not the way to do it.

Stupidity in management is alive and well everywhere (see: newspaper publishers), but this is the most amazing example I've heard of in a while.
Posted by Dicing with Dragons at 10:44 AM No comments:

Labels: how insane are these people, people who need to be struck with an assortment of hardwoods

No Goals in Evolution

Jim Manzi likes to type a lot (and now so do I), so when he wrote this, he makes some curious statements and mistakes.

"No matter how far science advances, an explanation of ultimate origins seems always to remain a non-scientific question."

Does it? I notice science keeps pushing it back, further and further into the realm of the unknowable. This leaves those who would invoke god as an explanation less and less to do. Might it be conceivable they then eventually be left with nothing to do after all? (At least as far as explaining the natural world is concerned.)


"Evolution in nature is more complicated — but the complications don’t mean that the process is goalless, just that determining this goal would be so incomprehensibly hard that in practice it falls into the realm of philosophy rather than science."

Or this is wrong, and evolution in nature is, in fact, goalless.


"The combination of a constantly changing fitness landscape and an extraordinarily large number of possible genomes means that scientists appropriately proceed as if evolution were goalless, but from a philosophical perspective a goal may remain present in principle."

Possibly. But why burden an explanation with unnecessary multiplicity?

"Science can not tell us whether or not evolution through natural selection has some final cause or not; if we believe, for some non-scientific reason, that evolution has a goal, then science can not, as of now, tell what that goal might be."

If you posit the existence of goals--of the existence of something which science can't disprove exists--then why submit that they exist at all, especially if they are completely superfluous?

We can imagine goals because we see primarily the successes of evolution (even extinct organisms are, for their time, outrageously successful), we don't see the failures, and yet there were always far far far more failures than successes. If we saw both in volume and proportion, would designists still suggest evolution had goals after all? Possibly they might, but would it still seem reasonable to do so?


"The theory of evolution, then, has not eliminated the problems of ultimate origins and ultimate purpose with respect to the development of organisms; it has ignored them."

Inasmuch as there is nothing to ignore (Evolution does not, for instance, strictly address abiogenesis. That's still a different department, and it makes no sense to fault evolution for not addressing it), but this, too, is wrong. Goals were often suggested as evidence for the reproductive success for some lineages over others by plenty of early workers and naturalists. It took time to dispense with this imaginary baggage, because it gradually became apparent that success was not a target of natural selection, but a result; one where indifference rules. Goals can still be imagined, but this is only possible by ignoring all of the failures, something science is certainly not doing.


"These problems are defined as non-scientific questions, not because we don’t care about the answers, but because attempting to solve them would impede practical progress."


Practicality doesn't prevent physical cosmologists from working on problems. And can Manzi really say no progress has been made? Practicality also poses no obstacle to mathematics (even before when practical uses for crypto were found last century).


"Accepting evolution, therefore, requires neither the denial of a Creator nor the loss of the idea of ultimate purpose. It resolves neither issue for us one way or the other. The field of philosophical speculation that does not contradict any valid scientific findings is much wider open to Wright than Coyne is willing to accept."

I think it's interesting that Manzi is constrained by his argument within the limits of the physical world and the information it generates, things which we only know about and benefit from by way of science, rather than any other kind of philosophy.

But he's not wrong. I do think his conclusion is correct (even if the reasoning behind it is plain wrong); science cannot address the existence or nonexistence of God; both views are therefore compatible (so long as religious philosophy chooses to not contradict reality).
Posted by Dicing with Dragons at 3:47 PM 1 comment: