Where Are the Missing Links?

I've just reposted an old entry from the old journal, and it reminded me of a point I wanted to make in that post so long ago.

Every so often, the creationist canard "there are no missing links" will reappear like a gunshot-tattered zombie. Creationists and anti-intellectuals alike appear to take weird delight in stitching together this smelly, rotten argument, as though they really expect it to pass (this time for sure!) though the chainsaws of scientists and laypersons who know better.

The problem is (to extend my metaphor to perhaps not-unreasonable extents), science has progressed beyond the chainsaw when it comes to dealing with these oozy and invalid arguments. With every new major fossil taxa uncovered (like Tiktaalik, Indohyus and Yanoconodon and so on and so on) as well as yet another molecular study of extant organisms revealing even more evidence in support of what is already one of the best supported scientific theories, science now has chainsaws and grenades and sharp sticks and particle beams and... well, you get the point.

But I want to beat up on the zombie, too. So I typed this, which perhaps might make a few creationists think twice before reaching for their sewing needles and scissors before they wind up with gross gobbets of gray flesh splattered all over their smocks.

The literature doesn't really talk about missing links for the simple reason that they don't really exist--I mean, there're just not missing ("missing," in the sense of creationist use, implies "not there").

Now there really are unknown ancestor taxa that would link known taxa, but since you can't really have a lineage without ancestors, the fact that the ancestor is unknowable is irrelevant. (Arguing that is it is somehow relevant is like suggesting that knowing exactly who the mother is of a bunch of kids is somehow necessary in order to identify the kids as being human.)

If it lived, it had an ancestor. What animal the ancestor is is actually unimportant. If the ancestor were known (by accident, because, again, ancestors are unknowable), it would simply be very closely related to its descendants, and therefore close enough at hand anyway.)

But the gist is this: cladistically, closely related organisms cluster closely together.

Distantly related organisms will have a range of intermediates (transitional forms). That is, many many links "separate" them.

So setting aside the uselessness of the "no missing link" argument, my rejoinder is: what's missing about the links? Since we find so many of them, it's really not possible to regard them as "missing."
Posted by Dicing with Dragons at 12:50 AM 1 comment: 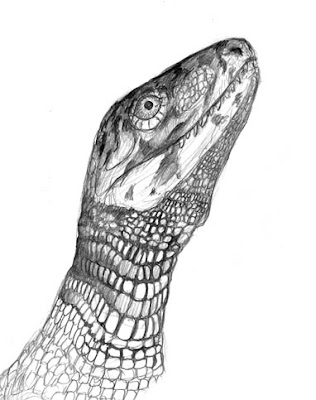 And not a particularly satisfying one, either. It's been suggested that I look at turtles and tortoises for skin ideas. This croc stuff may not be the best route to go.
Posted by Dicing with Dragons at 5:53 PM 2 comments:

The Archosauria will reflect the format of my previous show. To wit:

Seen here in it's natural habitat, this has been one of the more popular images up, much to my (rather slight) vexation. The Microraptor was way more work.

First piece up is Tarbosaurus bataar (alarming reptile-hero). As you might guess from it's species name, it's found in Mongolia.

Here's a PDF of the infosheet printed out beneath it. I am offering prints of this critter, both in the letter-size and the 18x24 inch size pictured above (with foamcore mount and shrinkwrapping it's $70.00)--the larger print excludes all the text in the letter-sized print.

Haliaeetus leucocephalus and the Avian Connection

Here's the PDF of the infosheet beneath it.).

Ankylosaurus: He's the Biggest One

The Ankylosaurus is a big one.

As you can see, this is a pretty big piece. Roughly three feet high by eight feet long, it's the largest piece in the room (allowing it to be mounted on three pieces of foamcore was a cost consideration: it would have been too cost prohibitive for me to mount it as a single piece, and would have posed problems in transportation).

Here's the PDF of the infosheet beside it.

Two drawings from life, of the same skull, different angles (section and elevation). Not much to say about Edmontosaurus. Like it's genus name, Edmontosaurus is a pretty boring vegetarian. While I'm not opposed to naming dinosaurs after the regions wherein they were found, I think exciting finds should be given exciting names. Not this one though. Edmontosaurus is as unexciting an animal as it gets.

So why did I draw it twice? What a good question! I shan't answer it, however, as I prefer to savor the mystery.

Here's the PDF of the infosheet beside them.


A Bi-Wing Foamcore and Gatorboard Flyer

Every exhibit needs a big piece to close on, something designed to impress. The Microraptor, for me, is that piece. At 1.84:1 scale, it clocks in with a five-foot wingspan.

PDFs of the infosheets: first, second, and last.

This is an unique piece that was very hard to make, and, since I really really need a car, it's $3000. (Composed of foamcore, gatorboard, and laminated 36# bond applied with ATG tape, hung with beading wire for support, available for pickup after the show is over 13 April 2007.)

(This post was migrated from the old Drupal-based blog to Blogspot on 17 January 2008.)
Posted by Dicing with Dragons at 11:12 PM 2 comments:

I (along with some folk) have started work on what amounts to my second art show. Very much untentatively titled: The Archosauria, it will, I hope, be a substantial overview of animals belonging to this most diverse group.

More so than my first show (The Dinosauria), it will be a journey, even with the help.

The show will run 9 August 2008 through 12 September 2008 at Vagabond Blues 1 October through 31 October 2008 at Sidestreet Cafe, Downtown Anchorage (address to follow). Hope to see you there.

Ah, the new blog smell.  This will be, I think, the last stop between Sacramento and Alpha Centauri.

I'll explain everything later. Meantime...
Posted by Dicing with Dragons at 9:28 PM No comments: