My Previous Post on this Image Was "I'm Done."

That turned out to be wrong. Very.

Three days later, I repainted the background, almost completely, and by the time I uploaded my file to be printed, I was utterly drained and exhausted. But here's the result, a piece more in character with its prequel, Trikeratos:

But if there's any interest, I may offer the (slightly) older piece as a digital print. It was a lot of work just to come to realize where and how I'd gone awry:

Someday I'll relate the full tale of how I saved Xmas with this repaint. But not today. I've got a lot to do before the beginning of next month.
Posted by Dicing with Dragons at 7:00 AM No comments:

For the #ArchosaursAndAutomata art show:
Possibly final! Finished, for sure, or possibly with a few minor revisions in time to print, and certainly not a complete rebrush of the entire sky, sea, and land.

UPDATE: Which has <a href="http://www.redbubble.com/people/cubelight/works/9747886-a-gloom-of-duralumin-dragons">happened</a>.
Posted by Dicing with Dragons at 6:00 AM No comments:

The New Filament of Coherent Lighthouse…

This is something that's been in the works for a while—a new graphic suitably representative of us:


And it goes along with this:


So why a cube, or a box? Boxes are common motifs in logo design (and some much better than others). I find platonic solids interesting, but I could have gone with any of them. I didn't, because there's a personal reason for choosing it (beyond the obvious implications of a three-dimensional form rendered in two): in 1985, I went to Expo 85 in Tsukuba, Japan.

And they had a 3D theater for the Sumitomo Pavilion, with a magnificent, giant yellow box inset into two mirrored facades, creating the illusion of a complete cube: 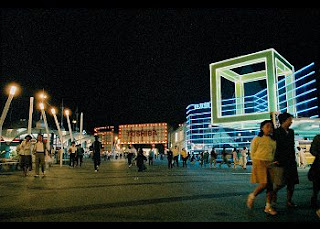 I never made it into the theater (the lines every time we went were far too long, and there was a lot to see). But the set up always impressed me.

I've run Coherent Lighthouse since 2004. I think of Cubelight as its filament, something which lights our way.
Posted by Dicing with Dragons at 6:57 PM No comments: 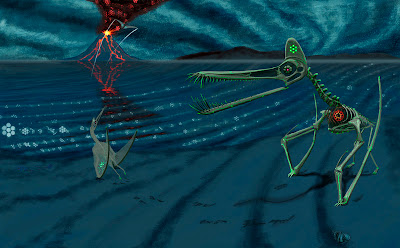 For the #ArchosaursAndAutomata art show, still in progress.
Posted by Dicing with Dragons at 12:22 AM No comments:

We're One Third the Way There!

Hey, I managed to change the #ArchosaursAndAutomata thumbnail on YouTube! Maybe I should have started out with this, but I was pretty busy when I uploaded it.

Our crowdfunding campaign has just passed the one third mark! There's still two weeks left to contribute to the printing and travel costs (because we live so far from the venue).

Right. Back to painting now.
Posted by Dicing with Dragons at 11:50 PM No comments: 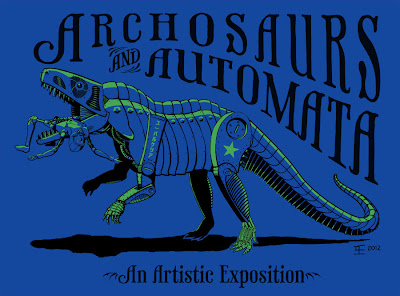 Thank goodness for Phaeton, the perfect typeface for this project.
Posted by Dicing with Dragons at 12:26 AM No comments:


It's a sequel of sorts, to our Dinosaurs and Robots show, and it runs during January 2013. We'll be present for the first Friday on the fourth, so if you wanted to see us both, we'll be there.

Funding for the new show has been set into motion: Raven and I started our first crowd sourcing initiative to help fund our next art show, Archosaurs & Automata, to be held at Modern Dwellers Chocolate Lounge in Anchorage, Alaska. Our goal is relatively modest, but if we make it, we can feature a bit more art at the show than we otherwise might, as well as offset some of the cost of time off work, travel to Anchorage from Homer, and the expense of printing.

We think it's very possible to accomplish this. Donations as of this writing have very nearly put us at one quarter of our funding goal, and it hasn't even been a full week yet.

The proprietors of Modern Dwellers told us our show was one of the most successful they'd had. We would like to build upon that success. Indiegogo has all the info for show donations. And you can also follow Raven or myself (@coherent_light) on Twitter for updates.

My Tumblr journal, Cyrillic Typewriter, also has details.
Posted by Dicing with Dragons at 6:30 AM 1 comment:

Why I do not rely exclusively on Google Image searches for Paleo-related research.

Darren Naish ( @TetZoo ) has a new post up on Tetropod Zoology concerning artist Dave Peters' website, reptileevolution.com and his blog at Pterosaur Heresies. David Peters is known for paintings and detailed reconstructions of extinct animals and an unorthodox way at looking at fossils.

Peters has used photos of many pterosaur taxa, traced a bunch of stuff in Photoshop and then based his ideas and reconstructions on these tracings.

Pareidolia may be best explanation for what Peters sees in these photos; other researchers seem unable to replicate his observations. And these tracings are just about the only evidence Peters has for the novel structures and reconstructions he now offers; he has not examined the specimens in person. While I don't think this is a necessary step to creating a reconstruction, it is certainly something which needs to be done if you're going to posit the existence of anatomy that people who have seen the original fossils don't see or publish anything about.

The problem is, anyone looking to do research on pterosaurs is going to find Peters' sites really easily—they are among the first images that pop up in any Google image search for "pterosaur," (and not just pterosaurs either) and most of what you find on Peters' sites is misleading, unsupported by any independent standards of evidence, or just wrong. I like the idea of being able to search a worldwide network of information from the convenience of a location which is rural and far far removed from libraries which carry subscriptions to periodicals like PNAS, Nature, or JVP, but not when I have to plow through a ton of rubbish to find useful information.

Peters' views are actually fairly interesting if considered from the standpoint of animals rooted exclusively in fantasy (or perhaps alt-evolution), but these ideas aren't worthy of consideration or of interest when I need to know what the current scientific consensus is when it comes to reconstructing animals like pterosaurs. As it is, his presence is pervasive on the web; Wikipedia includes frequent mentions and links to his work for even the more obscure animals.

Naish has presented some much-needed criticism of Peters' work, while bending over backwards to avoid damaging Peters' reputation or attacking him personally.
Posted by Dicing with Dragons at 8:01 PM 1 comment:

Snow on the ground in April in Alaska?

This is awkward in ways that only a man who has too little knowledge but far too much confidence can be.

Being a skeptic doesn't mean we will ignore evidence for the sake of taking a contrary position. Doing so doesn't make anyone a skeptic, it makes them uninformed, and quite possibly uninformable.

Cf. Real Climate or, if you are, like me, less "trained as a scientist" and more "likes to watch videos" (not un-mutual conditions, please note), there's some very accessible critiques on blogs and YouTube which cover this exact subject. and is occasionally covered by the Bad Astronomy blog.

Granted, it's difficult to understand subjects as complex as this as a whole unless one is very well-read (and it's obvious from Medred's writing that in spite of his "science training" he just isn't). It's very easy to find denialist talking points like these everywhere on the web (this doesn't grant them any merit). So this so-called "skepticism" is ubiquitous. And, like creationist talking points they have been refuted in some cases for decades.

And so I find articles of this sort frustrating.

When Craig wants us to be real and accept that his statistical and climatological illiteracy gifts him with an ability to  represent reality, I don't see any reason to take him seriously.

(Yes, I updated. I'm still really busy, but, as ever, I'm a little more actively blogging over at Cyrillic Typewriter.)
Posted by Dicing with Dragons at 3:36 PM No comments: