Posted by Dicing with Dragons at 5:55 PM 2 comments:

...But I intend to have a small announcement sometime soon.

Update: It is slightly related to the fact that I've just ordered one of these: 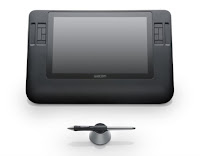 Specifically, it's time to vote for Brian Switek, whom I am wholeheartedly endorsing as winner of the 2008 Blogging Scholarship.

Honestly, how can anyone not vote for someone who names his blog Laelaps?

(I do realise this is a bit of a popularity contest, but I can't really do anything about that. Since this is how this particular scholarship is awarded, this is how it's got to be promoted.)
Posted by Dicing with Dragons at 12:47 PM No comments:

As of Now, My Dad Has Been In Surgery for Four Hours...

...With another 2-4 to go. A bypass has been mentioned as a possibility, in addition to the valve replacement. If that turns out to be the case, there will be an extra two hours in surgery for that.

[UPDATE: He's out and doing fine now. It's all recovery from here.]

I did vote today. I voted against Stevens and the corruption which seems to have embraced our representatives. Perhaps their replacements, if elected, will heed these words: you work for us, and nobody else. You forget that at your peril. I do have a question for anyone who voted for Stevens, in spite of his guilt: do you really think that he was going to last forever anyway? It takes someone awfully committed to a culture of decadence to willingly vote for a convict in the vain hope of preserving the pork Alaska has typically gotten. Perhaps its time Alaska learned to do without him. As in sooner, rather than later.

McCain-Palin: I voted against the both of you, because neither of you are suitable to run one of the greatest nations on earth. Both of your anti-science attitudes were a large part of my decision, and Palin's appalling ignorance and stupidity has made the rest of us Alaskans look bad to the rest of the nation. I've read too many conservative commentators that appear to have swallowed the hook that Palin would be useful to McCain, and found only an incredible capacity for self-delusion. And to the both of you: your comments regarding the opposition towards the end were out of line. McCain, I respected you once. You lost it. (Palin I never really liked or voted for, so she can't really lose what she never had.)

Some lessons here for everbody:

Conservatives in general: if you don't start returning to your roots (and get off the creationism kick already; it just looks sad using a bunch of rubes just for personal political gain), you will become increasingly irrelevant.

Liberals: please, stop whining already. (And stop opposing nuclear power and handguns. If you're serious about handguns, prove it and pass a constitutional amendment dealing with it; otherwise, stop wasting your time, let it go, and pick your battles.)

And Libertarians: you're already irrelevant. Keep up the good work.
Posted by Dicing with Dragons at 10:16 AM 11 comments: