Back from the Land of Cleve! 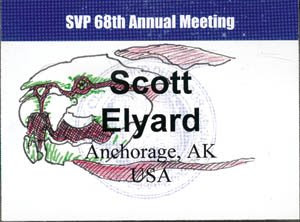 And it was the greatest vacation ever!

I'm back from my first SVP, and I have to say, without equivocation, that I would so totally do that again.

Who did I meet? I met many many people, including Julia and Amanda and Matt Celeskey (who, impossibly, managed to recognise me--or is just very good at spotting names on nametags) and Andrew Farke and Niel Kelly and Patty Ralrick and Matt Wedel and Nick Gardner and Alton Dooley and Tom Holtz (whom I only just barely managed to meet on my way out--and I had to interrupt mid-conversation in order to do so, the only time I did so during the entire course of the meeting) and Jerry Harris (who dresses in a very dapper manner--I also liked his invisible wall).

Um, I'll get my own image of the lunch up at some point, but until I get those files e-mailed to me, here's a look.

William oh-my-god-I'm-having-an-actual-conversation-with-freakin'-William Stout. Whom I had no idea was even here, in spite of the foreknowledge of the fact that he designed the SVP logo. (Yes, bought a shirt. And a pin. And I will buy his new book when it comes out in January.)

[UPDATE: Ack! Forgot to include...]Michael Skrepnick, one of the nicest guys in the world. I guarantee, if you hang around me at all, then at one time or another, you have seen numerous paintings of his.

David Krentz, who I finally managed to meet on the way out of a particularly crowded room (that is, I was escaping the room--crowds and heat plus deep personal supidity on my part for wearing a wool coat meant I had to leave the Poster Session a little earlier than I would have liked).

Art-poster Judy Peterson doesn't have a website, but she probably ought to own one. I wish I could have talked to her at greater length (well, I guess that really applies to everybody).

Painter Takashi Oda, had a great poster--elegant, fabulous, and very informative in terms of process.

With him was an outstanding sculptor I can neither recall the website for nor remember the name of. When my swag gets mailed to me, I'll update this page, I promise!

I also met science illustrator Utako Kikutani, who combined pencil with Photoshop (or digital at any rate) to much more effective manner than my gavial for the show. Her work is outstanding.

In all honesty, I'm glad I didn't participate in the artist exhibition. Better to drink in (per the advice given to me by Mr. Stout) my first SVP meeting. Also, it would have broken me to finish up the art show and get in a poster in time for SVP. (Besides, now that I see firsthand how it's done, I know now what to do!)

Dennis Roth sent me a paper he'd written about sharks.

Nick Gardner also allowed me to leaf through his sketchbook. In spite of his blog title, he did have a few finely rendered (and accurate) theropods. I don't think the man hates theropods, so much as he is a teensy bit sick of them--a position I readily identify with.

Spotted, but didn't talk to: Kevin Padian, Peter Dodson, Christopher Brochu, Gregory S. Paul, Michael Ryan, David Marjanovic and a few others I didn't really have the stones to either interrupt or just go up and introduce myself.

Things I've learned: how to finally pronounce acetabulum (assehTABooloom). I've been doing it wrong. William Stout is the nicest man on earth. Nick Gardner made the most compelling reason to use Flickr I've ever heard, and will work to implement it soon. Having business cards made was a good thing (Matt Celeskey's was the absolute best I collected; it made me ashamed of mine--to be honest, most of the artists at the show who gave me cards shamed mine).

Not spotted (but was hoping to meet): paleoartist Dan Varner, Ray Troll (does he go to SVP meets?), Mike Keesey, Carl Buell, John Sibbick... others.
Posted by Dicing with Dragons at 5:47 PM

Wow, cool! Stout's dinosaur book is one of my favorites and I feel like it influenced me a lot. (Combining art nouveau and dinosaurs may have been kind of a weird idea, but it turned out really frickin' cool.^^)

(Weird. Thot I responded to this comment, but my comment doesn't show up. Ah well, take twooo):

Stout's book is amazing. I popped it open again last night and just looked at the images.

Lookin' forward to seeing his book on his murals...

Although, in Seattle, I did get to hang out on several occasions with another "Raven"....Raven Mimura, to be exact.