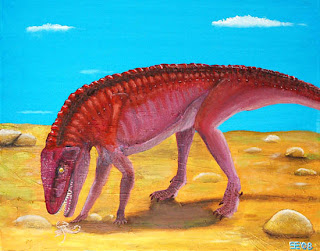 It may seem strange to admit an animal into an art show called The Archosauria that isn’t an archosaur, but under the definition chosen for the show (the Archosauria being comprised of the most recent common ancestor of birds and crocodiles and all of their descendants), Euparkeria is not actually a member of this group.

It is, however, very closely related to archosaurs -- belonging to a sister group to the Archosauria. Because it is so basal, Euparkeria can be regarded as a transitional form linking archosaurs to broader, more inclusive diapsid groups. In that sense, Euparkeria is so close to the genesis of a nearly quarter billion year long dynasty of reptiles that encompasses crocodiles and birds and everything else that evolved between them that it would seem foolish not to include it.

Those beginnings were certainly humble enough: Euparkeria is a small, lightly armored animal, no bigger than a housecat, which lived in Gondwanaland in the Early Triassic (about 248-245 million years ago, in what would become southern Africa). Euparkeria may have eaten insects or dined on smaller vertebrates while evading larger predators.

Many, many pencil sketches went into this, and I think it's safe to say almost none of them are ever coming back out. Many ideas were thought of and then discarded, due to time constraints/difficulty. As such, I'm still sort of wistful whenever I think of it. Still, in spite of the disappointments, this is the strongest piece I produced for our little show.

Oils on canvas. Sorry some of the paint is still a bit shiny (possibly I could have photographed it a bit better as well). At one point I think I was working on three pieces (oils) at once, and things are still somewhat not-dry on any of them.

Very nice. I'd like a pink euparkeria on a leash.

"Love the scorpion because it's...evil?"

The scorpion was evil.

"Very nice. I'd like a pink euparkeria on a leash."

Thank-you. I'll see what I can do.